First preview of what Choqok 1.0 will be a.k.a Choqok 1.0 Alpha1 is ready. (Codenamed “Reloading”)

One of important TODOs for Choqok was making it plugin aware, And now, It’s new, plugin base design is ready for developers who like to join in its development. 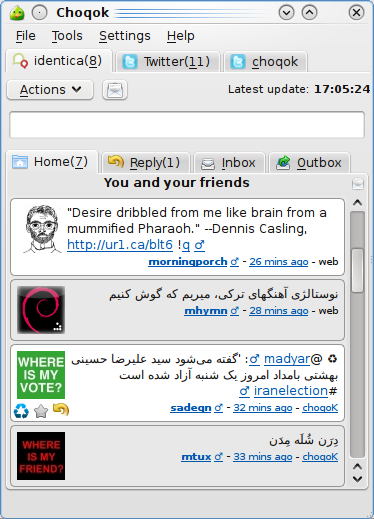 Currently there are 3 types of plugins we can extend Choqok with. You can find some useful information about how to write a plugin in gitorious wiki pages, and 2 new pages added to Choqok website, Development, and TODO List. They are all useful for developers to join in extending Choqok.

Most of changes on this release are sensible by developers, but there are some for users:

Some features did not implemented in new design, that you may miss on upgrade:

New features on new design are:

And you have to re add your accounts because of changes…

however it’s a developer preview, But it’s quit stable.

If you want to try new changes and don’t need leaked features, an upgrade may be funny, otherwise, I recommend you to stay with previous stable release (0.6.6) and wait for a later version…

You can get the source code from here.

I was launch a poll about Icon color between Green and Blue, and you choose the green one to be official icon. Thanks to all you for participating on it.