One year passed after latest stable release. But long time with so many changes and features for our Micro-Blogging client.

However this is not the officially stable 1.0 release, But it’s quit stable and usable now! And because of changes at twitter and Identica land, We highly recommend packing and using this version instead of 0.6.6. (One of the big changes in Twitter is Migrating authentication to OAuth method)

First I have to thank 2 groups of people who helped me on this release:

New features on this release:

Changes instead of previous version [1.0Beta1] : 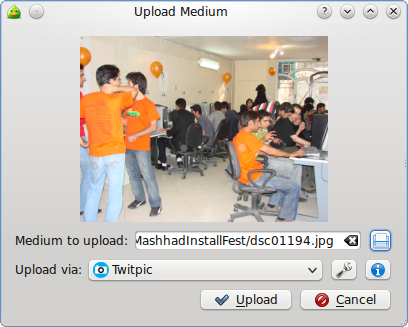 And, Of course! there are too many features and changes since version 0.6.6 🙂

You can download the source code from here, and follow the build/install construction (in README file) to build and install Choqok.
Or, You can wait for distribution packagers to package it for you.

Twitter guys announced that they will shutdown the basic authentication from 16 to 30 Aug, at a process of decreasing rate limit. So you have to migrate and use the new Choqok until then! Older ones won’t work with Twitter after 30 Aug.

You can make a donation and support us to keep it up and even better: