I’m really proud to announce Choqok 1.2 release, code named “Red Rose” and I want to dedicate it to my beloved fiance, Golnaz. 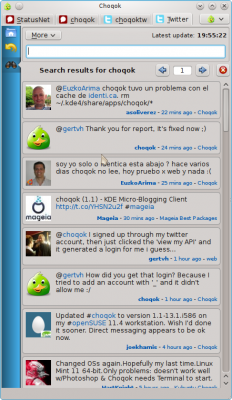 First change you will notice, is in user experience.

The idea came from my friend Bardia Daneshvar, and he was the one who implemented it. ( So, go and thank him for this change )

Another important change in Choqok 1.2 is some integrations with new changes on StatusNet, We now have a text saying in reply to @mtux, under posts that are reply to me. because StatusNet websites (including identica) are removing @mtux in dent texts by default. 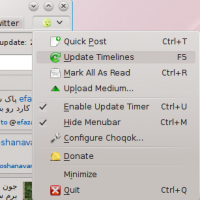 We want to have more space to do important things, reading/writing posts and communicating with friends. So, here we have an option to have more space in Choqok window, you can hide menubar and see a button on the top right of UI that will give you more important actions to do.

We have two simple but I think important changes for you,

Twitter is shortening every link you enter in your tweet, even if it’s already shortened, So, Untiny plugin will expand those links twice to give you the actual link.

Also there was an annoying bug in Choqok at direct messages support, is fixed.

There are some more changes in Choqok that maybe you don’t notice at all, like:

You can download Choqok 1.2 source code here, and build it manually. or wait for binary packages on your distribution package manager.

Soon, there will be some solutions for popular distributions in download page.

Just like before, you can donate some money and help us on Choqok development and keep it up and going forward.